When we think about “cancer scientists,” we typically conjure images of physicians treating their patients or biologists analyzing cells under a microscope. But cancer scientists can be found in fields beyond medicine and biology, from physics to chemistry to mathematics.

Sethuramaramasundaram (Sethu) Pitchiaya, PhD, is an excellent example of this scientific convergence that contributes to our understanding of cancer. Trained as a chemist, Pitchiaya began conducting research as an undergraduate student, working with Yamuna Krishnan, PhD, at the National Centre for Biological Sciences. After obtaining his degree in biotechnology, he moved to the United States to pursue a PhD in chemistry with Nils G. Walter, PhD, at the University of Michigan. “I am grateful to have trained in these laboratories, where I learned to use chemical tools for understanding biology – essentially as a chemical-biologist,” Pitchiaya said. “This interdisciplinary training enables me to study cancer using a multifaceted approach.” According to Pitchiaya, he has always had an interest in the workings of the human cell. “I was always intrigued by how intricate chemical reactions, be it enzymatic or assembly of biomolecules, dynamically occurred within the highly organized and compartmentalized environment of a cell,” he said. As he progressed in his research career, Pitchiaya became fascinated by the alterations to these reactions that could ultimately lead to cancer.

“While aberrations in the cellular machinery can lead to many diseases, the number and types of aberrations featured in cancers are astoundingly high, potentially rewiring the genetic circuitry to befit a new cellular paradigm,” Pitchiaya noted. This knowledge, as well as discussions with his mentor Arul M. Chinnaiyan, MD, PhD, about the translational potential of cancer research, sparked Pitchiaya’s interest in studying cancer for his postdoctoral fellowship.

During his time as a postdoctoral fellow, Pitchiaya was awarded the 2016 AACR-Bayer Prostate Cancer Fellowship to study androgen receptor regulation by long non-coding RNA (lncRNA; a non-coding RNA is an RNA molecule that is not translated into a protein). This class of gene transcripts are proposed to have widespread but poorly understood functions in disease. “Only about 3 percent of the human genome codes for proteins, biomolecules that are considered the workhorses of human cells, yet over 70 percent of the genomic landscape is extensively transcribed to make RNA,” Pitchiaya explained. “In prostate cancer, the non-coding transcriptome can undergo drastic alterations, and misregulation of certain lncRNAs can accentuate disease progression.”

Pitchiaya notes that lncRNAs are emerging as promising biomarkers for detecting prostate cancer, and he hopes that the results of his work will provide further insights into their function in this disease, as well as others where lncRNAs play a role. “We have currently identified a prostate cancer-specific lncRNA (ARlnc1) that both regulates, and is regulated by, the androgen receptor – a protein that is central to the disease,” Pitchiaya explained. “An in-depth understanding of this lncRNA will provide a general framework to elucidate lncRNA mechanisms in prostate cancer, shed light on their contribution towards disease initiation and progression, and potentially lead to improved treatment options for patients.”

Since the end of his AACR-Bayer Fellowship term in June 2017, Pitchiaya has reflected on the importance of this grant to his career development. “I am thankful to the AACR and Bayer for this fellowship,” he said. “It has not only facilitated my research by providing crucial funding for resources, but also enabled me to build a strong professional network and expand my knowledge in cancer biology.”

Though the grant term has ended, this does not mean that Pitchiaya will cease his study of lncRNAs in prostate cancer. Quite the opposite. In addition to continuing his work on this project, he is also committed to establishing an independent academic cancer research program. “We will investigate the potential of combining anti-lncRNA therapy with existing treatment options to identify effective combinatorial treatment strategies and to further understand the global impact of ARlnc1 in prostate cancer.” 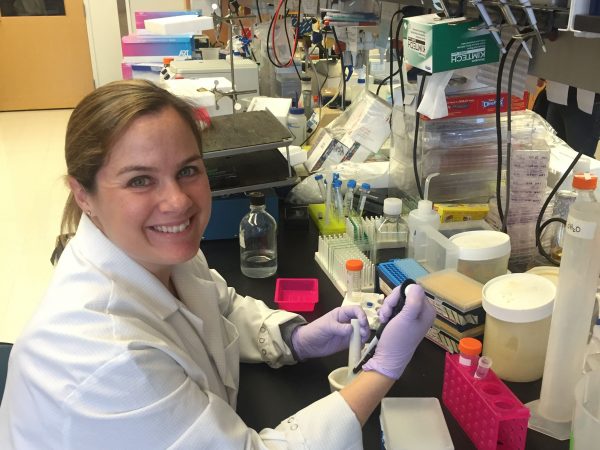