While COVID-19 is at the center of medical news, important cancer research findings continue to be reported. As March draws to a close, here are 10 “must read” articles hand-selected by the editors of the AACR journals. This month’s edition features results from clinical trials; preclinical research on the aggressive brain cancer glioblastoma; and insight into the risk of leukemia after dengue virus infection; among other topics. As always, the highlighted articles are freely available for a limited time.

Androgen deprivation therapy (ADT) induces c-MET signaling, which could contribute to the development of castrate-resistant prostate cancer (CRPC). In this phase II study, the authors examined whether combining ADT with a c-MET inhibitor called cabozantinib would delay the development of CPRC. The study enrolled 62 patients with newly diagnosed, hormone-naïve metastatic prostate cancer, who received first-line treatment with ADT in combination with cabozantinib. After a median follow-up of 31.2 months, the median progression-free survival was 16.1 months. Median overall survival was not reached. Reduced levels of the biomarkers, PSA, bone-specific alkaline phosphatase, or urine N-telopeptides were observed in over 80 percent of evaluable patients. Furthermore, 44 of 54 evaluable patients had responses as measured by bone scans (34 partial responses, 10 complete responses). Of the 34 patients with RECIST-measurable disease, three patients had stable disease, 18 patients had a partial response, and nine patients had a complete response. All adverse events were grade 3 or below, and the most common grade 3 adverse events were hypertension, diarrhea, and thromboembolic events. The authors found that increased levels of certain cytokines and angiogenic factors or high tumor expression of pFGFR1 were associated with shorter PFS. The authors propose that ADT in combination with cabozantinib has promising clinical activity in hormone-naïve, metastatic prostate cancer. This article was featured on the cover and was highlighted in the March 1 issue.

Even though mortality rates of female breast cancer have decreased in recent years in the United States, the five-year relative survival rate for women with distant disease remains low, at around 27 percent. As such, identifying new biomarkers and therapeutic targets for metastatic breast cancer is a high priority in the field. In this study, the authors demonstrate that bone morphogenetic protein-4 (BMP4), a key regulator of cellular differentiation, pluripotency, apoptosis, and migration, has reduced expression in aggressive breast cancer cell lines and human breast tumor samples. In preclinical studies, the researchers found that orthotopic tumor models with increased BMP4 expression could inhibit spontaneous metastasis to multiple organs, resulting in a significant extension of survival. Further, the researchers show that the antimetastatic capacity of BMP4 is dependent on the activation of the BMP4-SMAD signaling pathway, as gene silencing of either BMP4 or its downstream mediator SMAD7 resulted in the progression of metastatic disease. In breast cancer patients, increased expression of BMP4 and SMAD7 were associated with significantly improved recurrence-free survival and overall survival, suggesting that the BMP4-SMAD7 axis represents a potential therapeutic target for the treatment of metastatic breast cancer. This article was featured on the cover and was a highlight of the March 15 issue.

Pancreatic ductal adenocarcinoma (PDA) is often characterized by a lack of T-cell infiltration and dampened T-cell functionality. As a result, immunotherapy alone is not an effective treatment for PDA. The cytokine IL35 is involved in tumorigenesis, having immunosuppressive effects in PDA. However, the mechanism behind the immunosuppressive effects of IL35 remained undefined. Binding of IL35 to the IL35 receptor is known to activate the STAT signaling proteins. By inhibiting individual STAT pathways, the authors of this study determined that IL35 signals through the STAT3 pathway. When STAT3 was inhibited in mice, tumor growth was significantly reduced and T-cell infiltration was increased. STAT3 reduced T-cell infiltration through the inhibition of CXCR3, CCR5, and IFNγ expression. The authors also found that IL35 production by B cells, but not by regulatory T cells, was required for the activation of STAT3 signaling in CD8+ T cells. Deletion or pharmacologic inhibition of IL35 from B cells overcame resistance to anti-PD-1 immunotherapy in mice. Consistent with the cell culture and mouse data, the authors found that tumors from patients with PDA containing IL35-positive B cells also contained CD8+ T cells with increased phospho-STAT3 and no CXCR3. Together, the results indicate that IL35 produced by B cells suppresses T-cell infiltration and functionality through STAT3-mediated suppression of cytokine expression. This article was featured on the cover of the March issue.

Glioblastoma is an aggressive and lethal adult brain cancer that contains a subpopulation of glioma stem cells (GSCs). GSCs are involved in promoting tumor maintenance and resistance to therapy. Here, the authors performed a gain-of-function screen in human neural stem cells to identify epigenetic regulators that may mediate GSC self-renewal and tumor immunity. The screen identified CLOCK, a regulator of circadian rhythm, as a top hit. The authors found that CLOCK, along with its heterodimeric binding partner BMAL1, promoted GSC self-renewal and protumor immunity by upregulating the transcription of the chemokine OLFML3, which can recruit immunosuppressive microglia into the tumor microenvironment. Depletion of either CLOCK or BMAL1 in mouse models of glioblastoma resulted in significantly longer survival and reduced levels of stem cell and proliferation markers. Together, the results suggest a role for CLOCK in mediating stem cell self-renewal and tumor immunity in glioblastoma. The authors propose that CLOCK may be a potential therapeutic target for glioblastoma. This article was featured on the cover and was highlighted in the March issue.

Urinary bladder cancer is a common malignancy with a high rate of recurrence. Prior studies suggested that daily administration of non-steroidal anti-inflammatory drugs (NSAIDs) could lower the risk of bladder cancer. Furthermore, the epidermal growth factor receptor (EGFR) is overexpressed in bladder cancer, raising the possibility that EGFR inhibitors could reduce bladder cancer risk. However, continuous use of NSAIDs or EGFR inhibitors can lead to gastrointestinal or skin toxicities, respectively. Here, the authors used a rat model of bladder cancer to investigate the chemopreventive efficacy of weekly (pulsatile) administration of the EGFR inhibitor erlotinib alone or in combination with intermittent or continuous low doses of the NSAID naproxen. Rats received erlotinib only, naproxen only, a combination of erlotinib and naproxen, or no treatment. Dosing began one week, four weeks, or three months after carcinogen exposure. Regardless of when dosing was initiated, the combination regimen of pulsatile erlotinib and intermittent or continuous naproxen led to significant decreases in tumor weight, tumor multiplicity, and number of rats with large palpable tumors, compared with the untreated control group. Additionally, protein levels of proliferative and immune signaling markers were significantly reduced in tumor tissue. The authors propose that alternative dosing of NSAIDs and EGFR inhibitors may confer chemopreventive efficacy while reducing the risk of potential toxicities. This article was featured on the cover of the March issue.

Metastasis to the peritoneum is observed in approximately 80 percent of patients with advanced ovarian cancer. The WNT ligand, WNT5A, is found at high levels in the peritoneal fluid of women with ovarian cancer, but its impact on cancer progression remains unclear. In this study, the authors found that WNT5A is produced by mesothelial cells and visceral adipose tissue in the peritoneal microenvironment. Recombinant WNT5A promoted adhesion, migration, and invasion of cancer cells in a three-dimensional organotypic mesomimetic culture. Conditional deletion of WNT5A in mice led to reduced tumor burden and elevated levels of cytotoxic T cells, increased levels of M1 macrophages, and decreased levels of M2 macrophages, suggesting that WNT5A promotes an immunosuppressive microenvironment. The authors also identified the SRC family kinase FGR as a downstream effector of WNT5A. Inhibition of FGR abrogated WNT5A-mediated adhesion and motility. Together, the results highlight a role for WNT5A in ovarian cancer metastasis and identify FGR as a potential therapeutic target to suppress metastasis. This article was featured on the cover of the March issue.

Phase I Clinical Trial of the Wee1 Inhibitor Adavosertib (AZD1775) with Irinotecan in Children with Relapsed Solid Tumors: A COG Phase I Consortium Report (ADVL1312)

Inhibition of the tyrosine kinase WEE1, an important regulator of cell cycle progression, can sensitize tumor cells to cytotoxic agents. The first-in-class WEE1 inhibitor adavosertib has shown promising antitumor activity both as monotherapy and in combination with chemotherapy in a variety of adult cancers, but its efficacy in pediatric tumors has yet to be evaluated. In this phase I clinical trial, the combination of adavosertib with the chemotherapeutic agent irinotecan was evaluated in 37 children with relapsed or refractory solid and central nervous system tumors. Patients in five dose cohorts received adavosertib and irinotecan orally for five days on a 21-day cycle. Among the 27 evaluable patients, one had a partial response and two had prolonged stable disease. Two patients experienced dose-limiting dehydration; the maximum tolerated dose of adavosertib and irinotecan were determined to be 85 mg/m2 and 90 mg/m2, respectively. Phase II expansion studies evaluating this combination are ongoing. This article was highlighted in the March 15 issue.

Peroxisome proliferator-activated receptor delta (PPARδ) is a regulator of adipocyte differentiation that has been shown to promote the transformation of gastric progenitor cells and tumorigenesis in preclinical mouse models; how this nuclear receptor contributes to human gastric cancer progression remains undefined. In this study, the authors found that the stable expression of PPARδ in human gastric cells increased the expression and transcription of SOX9, a transcription factor that is overexpressed in human gastric cancer. The researchers demonstrate that PPARδ induces the transcription of SOX9 by directly interacting with the Hippo pathway coactivator YAP1. Additionally, the authors show that genetic ablation of either SOX9 or YAP1 significantly reversed PPARδ-induced oncogenesis. The importance of the PPARδ/YAP1/SOX9 axis in gastric cancer was further highlighted in patient samples, as the expression of all three were coordinately increased in gastric cancer tissues, and high expression of these three markers were associated with a higher risk of death. The authors conclude that the PPARδ/YAP1/SOX9 axis may represent a novel therapeutic target in human gastric cancer. The article was highlighted in the March issue.

Dengue fever, the global incidence of which has increased dramatically in recent decades, can result in abnormal hematologic profiles and bone marrow suppression, yet its association with the risk for leukemia remains unknown. To investigate this association, researchers analyzed nationwide population-based data from the National Health Insurance Research Database (NHIRD) in Taiwan. Between 2002 and 2011, over 12,500 laboratory-confirmed dengue-infected patients were identified; five controls without a history of dengue virus infection were selected from the NHIRD for each dengue case, and participants were followed until December 31, 2015. The researchers found that individuals with dengue had over twice the risk of developing leukemia compared with controls overall. After analyzing different follow-up periods, the study authors discovered that the risk of leukemia was increased only among those who had been infected with dengue at least three years prior, and that the highest risk of leukemia (over three times the risk) occurred between three and six years after infection with the virus. Read more about this study in an AACR press release. This article was highlighted in the March issue.

Malignant peripheral nerve sheath tumor (MPNST) is a rare, aggressive cancer that is prone to recurrence after surgery; finding effective treatments for MPNST is a significant clinical need. Components of the eukaryotic initiation factor 4 (eIF4) complex, which facilitates protein translation, are often overexpressed in MPNSTs. Preclinical studies revealed that inhibition of eIF4A with the rocaglate silvestrol suppressed MPNST cell growth, yet silvestrol harbors a variety of suboptimal drug-like properties, such as limited oral bioavailability, sensitivity to MDR1 efflux, and pulmonary toxicity in dogs, along with a bulky dioxanyl ring, making the synthesis of silvestrol laborious. In this study, the authors analyzed rocaglates without the dioxanyl moiety and identified two compounds – rocaglamide (Roc) and didesmethylrocaglamide (DDR) – with growth inhibitory activity comparable to silvestrol. Roc suppressed the growth of multiple types of sarcomas, and administration of Roc in orthotopic MPNST mouse models showed potent antitumor effects and did not induce pulmonary toxicity in dogs. Neither Roc nor DDR were sensitive to MDR1 inhibition. The authors conclude that Roc and DDR could become viable treatment options for patients with MPNST and other sarcomas. This article was highlighted in the March issue. 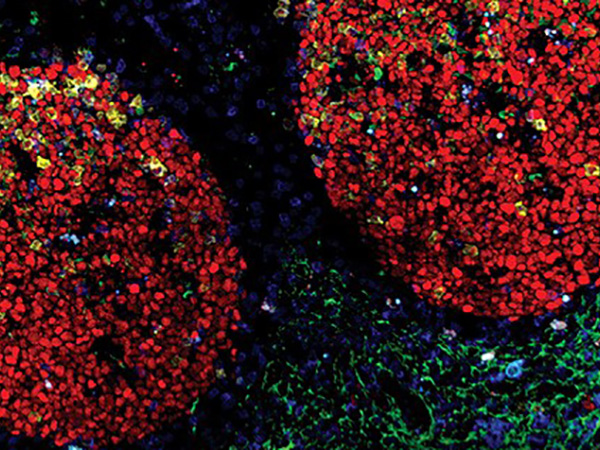