Home > About the AACR > Newsroom > Pillars

For Margaret McGill, palliative care was key to her cancer care, enabling her to regain her quality of life and reach her goal of undergoing a bone marrow transplant

By mid-2020, Margaret McGill’s multiple myeloma forced her to use a wheelchair and she was in intense pain. She was unable to engage in the sewing projects that she enjoyed because she couldn’t get downstairs to her sewing room. Her quality of life was further diminished by not being able to do many other activities such as gardening and walking outdoors.

Margaret was losing weight and was not in shape for the stem cell transplant she needed to treat her disease and extend her life.

The resident of Renton, Washington, a suburb of Seattle, had been diagnosed with multiple myeloma in 2019 after suffering pain in her legs. Doctors had inserted a rod in her femur to keep it from breaking. She had bone fractures in her back and ribs and had to wear a back brace and leg splints.

“I had severe neuropathy in my legs and in my feet from one of the chemotherapy drugs,” she recalled. She also had contractures in both feet.  “I had to walk on my tiptoes; my feet would not go to the ground, so I couldn’t balance myself at all. I was in such bad condition at that time, I wasn’t strong enough for the transplant.”

As the medical director for Supportive and Palliative Care at the Seattle Cancer Care Alliance, Dr. Loggers, who is board certified in Hospice and Palliative Medicine, sees patients who are referred to her by medical oncologists for assistance for everything from managing symptoms to dealing with distressed family members.

“Often when we first meet an individual, we’re going to be working on optimizing their symptom management, so things like pain,” she explained. “As we get to know them, though, often they share with us more of their concerns about their disease trajectory, such as how they and their family are coping, or maybe how their children are responding to their illness.”

While palliative care may include helping some patients plan for the kind of care they want to receive at the end of their lives, Dr. Loggers was quick to point out that palliative care is not the same thing as end-of-life, or hospice, care.

Unfortunately, however, that was Margaret’s first impression. When she Googled “palliative care,” she found a discussion of end-of-life care.

The idea that palliative care is only for patients with a terminal disease is a myth, Dr. Loggers said.

“I think the most important difference between palliative care and hospice is that palliative care is about what you need, not about your prognosis,” she said. “We think about palliative care as specialized medicine for people with serious illness, and that can begin at the first day of diagnosis.”

Palliative care can run right along with curative therapy, she explained, and can begin at any stage of the disease. It may be recommended for patients of any age.

“We’ve got to better align with our medical oncologists and the patients that they’re serving to ensure that we’re being referred at the right times for those patients,” Dr. Loggers said.  “I think we also need to help them with clear language around how to introduce palliative care to overcome any misunderstandings . . . to break that myth that palliative care and hospice are the same thing.”

Dr. Loggers has a unique view of palliative care since she is both an oncologist who treats patients with sarcoma and a specialist in palliative care, a passion she developed during a fellowship at Massachusetts General Hospital and Dana-Farber Cancer Institute. While there, she recruited patients into a groundbreaking study of early palliative care in patients with advanced lung cancer. Jennifer Temel, MD, was the lead author of the study published in the New England Journal of Medicine in 2010.

Thomas J. Lynch, Jr., MD, president and director of the Fred Hutchinson Cancer Research Center and a member of the Board of Directors of the American Association for Cancer Research (AACR) was the senior author of the study. He is a strong advocate of early palliative care.

Dr. Lynch highlighted the far-reaching impact of the study.

In Margaret’s case, Dr. Loggers started by listening to her concerns and focusing on the goal of getting her ready for a stem cell transplant by identifying barriers, step by step.

“We realized, for example, that the splint that she was using was probably ineffective and uncomfortable. So, we got her a better splint and we helped her refine her pain medication, particularly at night, so that she can wear that splint long enough to get benefit from it,” said Dr. Loggers.

“Over time, we were able to refer her to a podiatrist, who could provide Botox to her Achilles contractures and be able to release that,” she continued “And then to integrative medicine, who provided acupuncture for pain and helped us reduce the amount of opioids she had to use in order to have the pain relief.”

“As she was able to walk more, we were able to set goals with her about the kind of activity … that would motivate her further. And over time, Margaret’s made incredible progress.”

When Margaret thinks of how far she has come in the year since meeting Dr. Loggers, she tears up.

“When I started, I was in a wheelchair and I had a brace on my back,” she said. “I was in very bad shape and I had lost a lot of weight. And then I progressed to a walker, a Rollator. And now I use a cane. Now I know that I’m strong enough to go through this. I know it’s going to be really hard. But now I know I am strong enough to do it.”

In August 2021, Margaret reached her primary goal: She entered the hospital of the Seattle Cancer Care Alliance to receive the stem cell transplant that she and her family hope will give her the best outcome possible for her cancer.

George McGill, her husband of 47 years, is optimistic.

“Once it starts working and the bone marrow starts producing proper blood again, then she’ll be even stronger and be able to do more things and spend more time with the family, and particularly, the grandkids,” he said. “That’s what we’re hoping.”

While palliative care is working well for Margaret, supporters of the concept, including Dr. Lynch, feel that it isn’t fully accepted.

“Unfortunately, I don’t think it’s gone far enough. I still think you have great resistance to palliative care from patients, from families, and from some physicians,” he said. “I think we have grossly under-funded palliative care research.

“Because there’s not a clear revenue stream associated with palliative care, I think many cancer centers and hospitals have not provided sufficient funding. I think we can all do a better job at supporting palliative care efforts across the board,” he added.

One problem is that Medicare takes a restrictive approach to reimbursement, Dr. Lynch said.

“I think Medicare should take a broader view of what’s considered palliative care,” he said. “I also think that as we move toward value-based care models—which are increasingly the way that we’ll be funding health care as time progresses–I think it’s more likely that we’re going to find that the value provided by palliative care becomes something we can sustain in a value-based payment model.”

“It’s also important,” she added, “to appreciate how palliative care achieves those outcomes.  We do that not by withholding care, not by preventing people from getting the care that they actually want to have, but by listening carefully to them and aligning the care they receive with the values and goals that they’ve expressed. These cost savings reflect what patients and families really want, which is not to be in the hospital, not to be in the emergency department—they want to be at home. They want to be receiving only the care that’s really necessary to achieve their goals.”

Misconceptions about the role of palliative care appear to be widely shared by the public, according to a study published in July 2021 in the AACR journal Cancer Epidemiology, Biomarkers & Prevention. Motolani Ogunsanya, PhD, an assistant professor at The University of Oklahoma Health Sciences Center, was the study’s lead author.

Dr. Ogunsanya and colleagues found that 89 percent of Americans responding to a national survey had little or no knowledge of palliative care.

“Palliative care is expanding nationwide through high-level policy commitments, but service provision, education, and funding do not match rapidly growing needs,” the authors wrote. “Addressing the knowledge gap in a variety of health provider, web-based, community, or other communication-based settings is a priority to change norms around using palliative care services.”

Editor’s note: At the time of publication, Margaret McGill is doing well after her stem cell transplant. 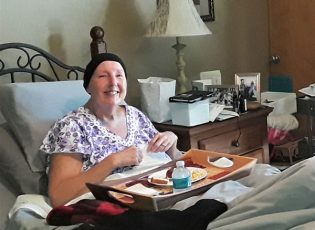 Helping a Patient Get Back to Her Feet

For Margaret McGill, palliative care was key to her cancer care, enabling her to regain her quality of life and reach her goal of undergoing a bone marrow transplant.