Home » Patients, Caregivers, and Advocates » Survivors » Experiencing a Special Moment Thanks to Immunotherapy

Dave Maddison: Experiencing a Special Moment Thanks to Immunotherapy

When his bladder cancer spread and standard treatments failed, Dave Maddison grasped at a clinical trial for an investigational immunotherapy.

Last Christmas, Dave Maddison, 70, went to visit his daughter, who lives about four hours north of his home in Bishopsteignton, South Devon, England. On a rain-drenched day during that visit, Dave went to watch his 15-year-old grandson play soccer.

Some seven years before that moment with his grandson, Dave, who runs a small metalworking company in the south of England, was diagnosed with bladder cancer. Following his diagnosis, Dave underwent laparoscopic surgery to remove the tumor and his right kidney. Six months later, a follow-up scan discovered a new tumor, which was treated with a four-month combination chemotherapy regimen.

“I was very apprehensive about going on chemo, but I didn’t have a choice. There was no other option; surgery hadn’t worked,” he said. “So I started a course of chemo, gemcitabine, and cisplatin.”

For Dave, the chemotherapy was debilitating.

“I was in and out of hospital while I had chemo because my reactions were so extreme,” he said. “At the end of five years, which included lots of major surgery and months of chemo, and 50 consecutive days of radiotherapy, my oncologist said to me, ‘Sorry Dave, can’t do anything. Sorry Dave, it’s the end of the line. Sorry Dave, it’s spread.’ And she’s in tears because after five years you build a bit of a rapport with people.”

He had 11 tumors in his body, including nine in his right lung, one above his stomach, and a grapefruit-sized tumor on his pelvis. He was told he had eight months to a year to live. But grasping a faint hope, the doctor sent him to see another oncologist, a friend, who she thought might know about a clinical trial for Dave. And that’s how he was introduced to Professor Thomas Powles at Barts Cancer Institute in London.

“I nearly fell over when I saw the professor. I’d never met one before,” he said. ‘Tom put it quite succinctly to me. He said, ‘Dave, there’s a trial we’ve got a good feel for. We don’t know what’s going to happen, but if the worst happens, you’ll be looked after; if the best happens, you’ll live. Do you want to go on it?'”

Dr. Powles explained to Dave that the trial would give him a 50-50 chance of living. To someone given less than a year to live, 50-50 sounded pretty good, and Dave joined the trial for an investigational immunotherapeutic called atezolizumab (Tecentriq).

“When I had my first shot of Tecentriq, my wife and I went on the train up to London, we had breakfast on the train and went into Barts,” he said. “It was all over by lunchtime. We hung around in the afternoon to make sure I had no reaction to it, came home that night, and went to work the next day. There were no side effects.”

After nine infusions, 10 of the tumors were gone and the largest one had shrunk from the size of a grapefruit to the size of a thumbnail.

“My life in the last two years has gone from preparing for death, to can’t get enough of it, love it. That’s the difference Tecentriq has made.”

Last December, after his grandson’s soccer game, Dave and his family went back to his daughter’s house, got dried off, had dinner, and everyone but Dave went off to bed.

“I just sat there, the fire was on, and I had a drink. I thought “Yeah, I’m one of the really, really fortunate ones. Right place right time, I got hold of the right straw,'” he said. “That experience with my grandson, I’m sure will live in his memory, and it damn well lives in mine. But I could only have that experience of seeing my grandson win that game because of Tecentriq and the research money that had gone into Tecentriq.”

“Now there must be tens of thousands of people like me around the world who want that experience and there’s only this research that’s going to give it to them. It’s going to come about by the application of intelligence, the funding of intelligence, and sheer, cussed, dogged hard work and not being put off by failure. If you can do it for me, surely we can do it for lots of others, can’t we?” 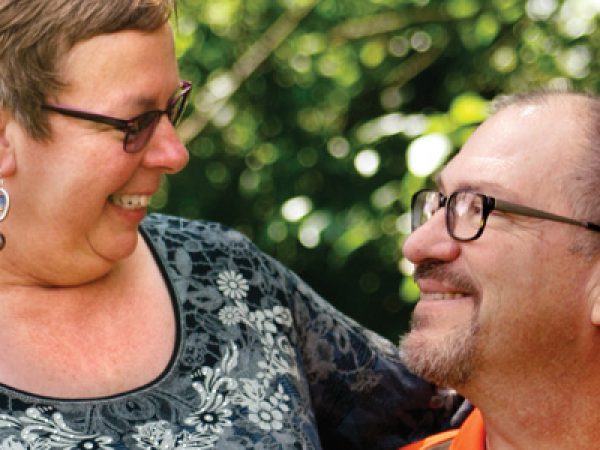