Editor’s note: Cancer Today Senior Editor Marci A. Landsmann shares her experience reporting on a young lung cancer survivor, Emily Bennett Taylor, who dreamed of starting a family. Read more about Emily’s story in Cancer Today and on her blog. Cancer Today, a magazine for patients, caregivers, and survivors, is published by the American Association for Cancer Research.

I first learned about Emily Bennett Taylor, a stage IV lung cancer survivor, through Inspire.com, a website that offers online communities for people with different diseases, including cancer. At the time in 2015, I was looking for cancer survivors to share some of their experiences with fertility preservation for a feature story I was writing for Cancer Today. When I initially spoke with Emily, it had been a little over two years since the then-30-year-old had completed her cancer treatment, which consisted of chemotherapy; grueling surgery to remove her right lung, lung’s lining, diaphragm, lining of the heart, and chest lymph nodes; and high-dose radiation.

She and her husband, Miles, were just starting the process of looking for a surrogate—using their blog, which chronicled Emily’s cancer experience, to make a call for volunteers. In our conversation, Emily was clear about her goals: She was going to achieve her dream of having a family and she was going to use her experience to help others who faced lung cancer.

We knew that Emily’s story would make a great addition to Cancer Today. My hope, though I didn’t say it to her at the time, was Emily would tell her story and we’d include a picture of her with her baby on our cover.

In the months that followed that initial interview, I was overjoyed to learn that Emily’s high school track coach agreed to be her surrogate. Then, later, I was elated to discover she and Miles were expecting twins. On April 20, 2016, Hope and Maggie were born.

In all of my exchanges with Emily, I have been impressed with her will to bravely go forward in the direction of her dreams. Emily and Miles make a point to soak in day-to-day joys—a trait that I suspect the couple always possessed, but one that seems especially essential when facing advanced cancer.

Before Emily started chemotherapy treatment, the couple underwent fertility treatment. They framed four pictures of their embryos and hung them, like pieces of modern art, on their bedroom wall. The day before Emily underwent surgery at Mount Sinai Hospital in New York City, the couple didn’t mourn what could be lost. Emily and Miles had a send-off party for her lung. They walked in Central Park. Emily danced, blew up balloons, and screamed the acronym “NED” (no evidence of disease) off the Empire State Building. For the last three years, the couple has celebrated that day in February 2013—coined Lung Day—without cancer.

As writers who detail people’s journeys with cancer, we have to be careful. Even in exceptional stories like Emily’s, there are struggles and there are always others who do not fare as well. As a spokesperson for the Bonnie J. Addario Lung Cancer Foundation, Emily talks to lung cancer patients all the time—and has said goodbye to many too soon. In addition, the young new mother must also weigh getting enough rest against her instinctive desire to always be there for her girls.

But Emily doesn’t center on these challenges. Like so many survivors, she goes on. The inspiration in Emily’s story lies not only in the fact that she was blessed with two baby girls, but also in her dogged ability to dig in her heels and go about making life’s plans. Stories like Emily’s may not always be the norm, but the fact that they happen at all gives form to the fact that they can. Before treatment, Emily Bennett Taylor and her husband, Miles Taylor, hung four framed images of their frozen embryos on the bedroom wall (in the background). Hope, left, and Maggie were born on April 20, 2016. During chemotherapy, she would meditate, visualizing scenes of a future with her husband and children. Photo by Dawn Bowery 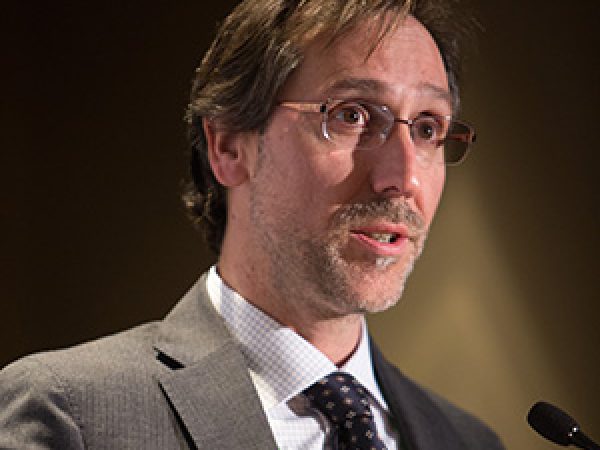