For October’s installment of Editors’ Picks, the AACR journal editors have selected studies that feature results from two phase II clinical trials, an investigation of aspirin use to reduce colorectal cancer risk, and an analysis of how persistent poverty can shape cancer mortality rates, among other studies. As always, articles highlighted below are freely available for a limited time.

Because many tumors that initially respond to EGFR-targeted therapy eventually develop resistance, a bispecific antibody targeting EGFR and cMet, known as amivantamab, was developed to overcome this limitation. While amivantamab has shown potent in vivo anti-tumor efficacy in human xenograft models driven by mutant, activated EGFR, in vitro studies showed limited downregulation of EGFR/cMet receptor and little anti-proliferative effects unless isolated human immune cells were added. In order to elucidate the key immune cell types that interact with the antibody tail (the Fc region) and promote the antitumor activity of amivantamab, the study authors conducted a comprehensive assessment of Fc-mediated effector functions. They found that monocytes and/or macrophages are key mediators of EGFR/cMet downmodulation, and that these cell types are required for in vivo tumor efficacy. Notably, the authors report that the process of trogocytosis, when lymphocytes extract surface molecules from antigen-presenting cells and express these molecules on their own cell surface, was the dominant mechanism of action for the preclinical activity of amivantamab. The authors conclude that their results highlight the importance of trogocytosis as a mechanism of cancer cell death, which could potentially shape the design of future antibody-based therapies. This article was highlighted and featured on the cover of the October issue.

Effect of Low-dose and Standard-dose Aspirin on PGE2 Biosynthesis Among Individuals with Colorectal Adenomas: a Randomized Clinical Trial

Low-dose aspirin use may help prevent colorectal cancer; however, more information is needed to identify those who might benefit from such intervention. In this study, the authors analyzed the impact of low-dose aspirin use on the levels of the urinary metabolite, PGE-M, which is a biomarker of colorectal cancer risk. The study enrolled 180 adults who had recently undergone adenoma resection and who had not taken aspirin in the previous six months. Participants took a placebo or one of two different doses of aspirin each day for 8 to 12 weeks and provided pre- and post-intervention urine samples. Both aspirin doses significantly reduced urinary levels of PGE-M, while placebo treatment did not. In many patients, PGE-M reduction reached a threshold that would be expected to prevent recurrence of adenoma in 10 percent of patients. The authors propose PGE-M as a potential biomarker to measure the chemopreventive effects of aspirin on colorectal cancer risk. This is one of three studies featured on the cover of the October issue.

While chemotherapeutic approaches are efficacious in ovarian tumors, about 75 percent of patients diagnosed with advanced stage disease will experience a relapse following first-line treatment with chemotherapy. Such approaches, which can successfully decrease tumor bulk, may not eradicate cancer stem cells, and the persistence of these cells following chemotherapy has been found to contribute to resistant tumors in ovarian cancer. In this study, the authors demonstrate that the tumor suppressor DAB2IP (for disabled homolog 2-interacting protein) is epigenetically silenced by EZH2 in ovarian cancer stem cells. Further analyses revealed that DAB2IP can modulate stemness-associated genes through inhibition of the WNT signaling pathway, specifically by downregulating WNT5B, an important stemness inducer. Co-administration of an EZH2 inhibitor and a RAC1 inhibitor, which blocks WNT5B-induced non-canonical WNT signaling, synergistically repressed ovarian cancer stem cell survival in vitro and enhanced platinum sensitivity in vivo in a mouse xenograft model. The authors conclude that combining an epigenetic therapy with a non-canonical WNT signaling inhibitor has the potential to eradicate ovarian cancer stem cells and prevent ovarian cancer recurrence.

Pancreatic ductal adenocarcinoma (PDAC) is an aggressive cancer with a high mortality rate. Two transcriptional subtypes of PDAC were recently identified: classical and basal-like, with the basal-like subtype having a worse prognosis. A greater understanding of these subtypes could lead to tailored treatments, but there are no available preclinical models for these subtypes. In this study, the authors developed a novel in vivo xenograft model by transplanting patient-derived PDAC organoids into the pancreatic ductal system of mice. The resulting extra-ductal neoplasms that resemble advanced pancreatic intraepithelial neoplasms (PanIN) develop into either aggressive or indolent tumors, reflecting the basal-like and classical subtypes, respectively. Analysis of each subtype in this model revealed that cell plasticity and the RAS signaling pathway contributed to subtype specification, with activation of RAS associated with the basal-like subtype. The authors also identified several RAS-regulated proteins that could be potential therapeutic targets in PDAC. The authors propose that their model could be used to identify potential biomarkers and therapeutic strategies for each PDAC subtype. This article was highlighted and featured on the cover of the October issue. A related commentary can be found here.

Precision medicine relies on the identification of genetic variants in cancer cells; however, the biological significance of many variants remains unknown, and there is a lack of validated methods for distinguishing between functional and benign genetic variants. In this study, the authors evaluated the predictive value of an in silico strategy to discern between functional and benign variants of the MAP2K1 and MAP2K2 genes, which express proteins involved in the MAPK signaling pathway. The in silico model included mutational data from 42,434 human cancers representing 32 different organs and incorporated hotspot analysis, three-dimensional molecular dynamics simulation, and sequence paralogy. This approach allowed the researchers to identify functional and benign variants; however, the model was not able to predict drug sensitivity. The authors conclude that in silico approaches should be paired with laboratory and clinical approaches to assess drug response. A related commentary can be found here.

The approval of the PD-1 inhibitor nivolumab (Opdivo) for the treatment of patients with platinum-resistant metastatic or unresectable bladder cancer was based on results from the phase II CheckMate 275 clinical trial. The current study provides a report on the extended follow-up of this trial, along with exploratory biomarker analyses to evaluate potential associations of tumor mutational burden (TMB), PD-L1 status, or previously identified mutational signatures with clinical outcomes. The minimum follow-up was 33.7 months among the 270 treated patients, of which 139 had evaluable TMB. The objective response rate (ORR), median progression-free survival (PFS), and median overall survival (OS) were 20.7 percent, 1.9 months, and 8.6 months, respectively. The researchers found that higher TMB was associated with higher ORR, longer PFS, and longer OS, and that the incorporation of TMB with PD-L1 status could better predict ORR, PFS, and OS compared with PD-L1 status or TMB alone. The authors conclude that patients with high TMB may have improved responses following treatment with nivolumab, and that the use of composite biomarkers may better identify patients who will respond to this treatment. This article was highlighted in the October 1 issue. A related commentary can be found here.

Certain members of the SPANX family (for sperm protein associated with the nucleus, X-linked), which are expressed specifically in testis tissues under physiological conditions, are expressed at high levels in melanoma, with increasing expression at later stages of the disease. In this study, the authors investigated the role of these overexpressed genes, referred to as A-type SPANX genes, in melanoma growth and proliferation. They found that A-type SPANX proteins facilitated tumor cell growth in melanoma spheroids, and depletion of A-type SPANX genes induced cell cycle arrest. Immunoprecipitation analyses revealed that A-type SPANX interacts with lamin A/C (LMNA), an essential protein that provides structure to the nuclear membrane, in melanoma cells. Further, depletion of A-type SPANX genes altered the organization of LMNA, leading to disruption of the nuclear architecture of melanoma cells. The authors conclude that A-type SPANX can modulate LMNA organization and function in melanoma cells, raising important questions relevant to LMNA control and dysregulation in cancer. This article was highlighted in the October issue. 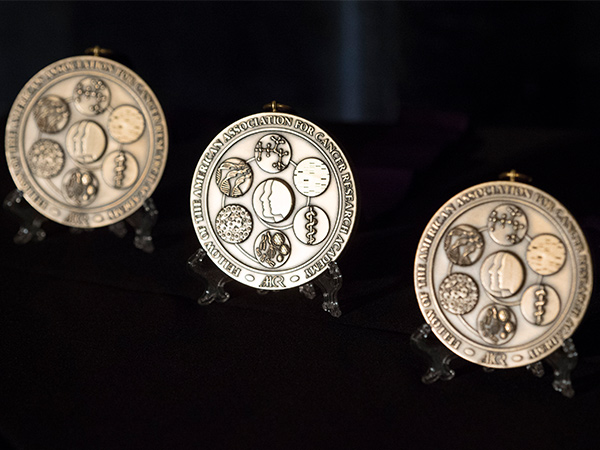