Diana M. Merino, PhD, was only 12 years old when she was diagnosed with Hodgkin lymphoma. Her treatment appeared fairly straightforward: After less than a year of chemotherapy and radiotherapy, she was declared cancer-free.

But three years later, her cancer came back. This time, Dr. Merino was diagnosed with recurring Hodgkin lymphoma. Her family had moved from their native Peru to Toronto, Canada, and young Diana was treated at The Hospital for Sick Children. That time, in addition to chemotherapy and radiation, she underwent an autologous stem cell transplant. During her long hospital stays, she began to take an interest in biomedical science.

“I think it was when I had been diagnosed for a second time that I started taking an interest in pursuing a career in health sciences. I loved learning why I would get X medicine for symptom Y, or how the radiation is supposed to kill cancerous cells,” she said.

Dr. Merino was once again declared cancer-free, and graduated from high school with honors, even after losing nearly a year of school while in treatment. After high school, she went on to study biology and nutrigenomics, the study of genetic variation on food metabolism and its implications on human health. After receiving her master’s degree from the University of Guelph in Canada, Dr. Merino decided to pursue her doctorate, specializing in cancer genetics.

“Because of my personal story with cancer, I chose to investigate the genomics of brain tumors, more specifically choroid plexus carcinomas (a rare but serious brain tumor), under the mentorship of David Malkin, MD,” she said. Dr. Merino conducted her graduate work at The Hospital for Sick Children, where she had spent so much time as a teenager.

“This is how my path has come full circle, bringing me back to where I started as a patient, and now I’m a researcher who is passionate about studying pediatric cancer,” she said.

In Dr. Malkin’s laboratory, Dr. Merino and fellow researchers investigated the genomic alterations that drive choroid plexus carcinoma. She and her fellow researchers discovered chromosomal aberrations and changes in gene expression and methylation patterns, which could help improve diagnosis and treatment for the disease.

“My overarching goal is to be able to harness this genetic information in order to personalize patient care at different stages of disease, from preventative screening protocols to cancer therapies to survivorship care,” Dr. Merino said.

Dr. Merino is currently a postdoctoral fellow in the Division of Cancer Epidemiology and Genetics at the National Cancer Institute (NCI). Her research revolves around investigating the association between germline and somatic genetic abnormalities, and risk of subsequent cancers in childhood cancer survivors and individuals with hereditary cancer syndromes. She is also investigating the effect radiation exposure has on the development of subsequent cancers in these populations.

“This is a field that I hold close to my heart, so I’ve been extremely blessed to be able to contribute to the field from a professional but also a personal perspective,” Dr. Merino said.

Outside the lab, Dr. Merino has embraced the opportunities that the American Association for Cancer Research offers to young scientists. She became an associate member of the AACR in 2011 when she attended the Annual Meeting for the first time. She earned the AACR Minorities in Cancer Research Scholar Award in 2011 and 2012.

“In the summer of 2013, 10 years after I was declared cancer-free for the second time, I found a bump on my back while having a massage. Doctors diagnosed it as undifferentiated pleomorphic sarcoma, a type of soft tissue sarcoma, and it is very likely that it was a result of the radiation I had received many years ago to treat my primary cancer,” said Dr. Merino. She underwent radiation to reduce the size of the lesion, then had the tumor surgically removed in early 2014.

Today, she remains cancer-free. Her future goals include advocating for cancer research, patient advocacy and health policy, especially in the field of childhood and adolescent/young adult (AYA) cancer survivorship. 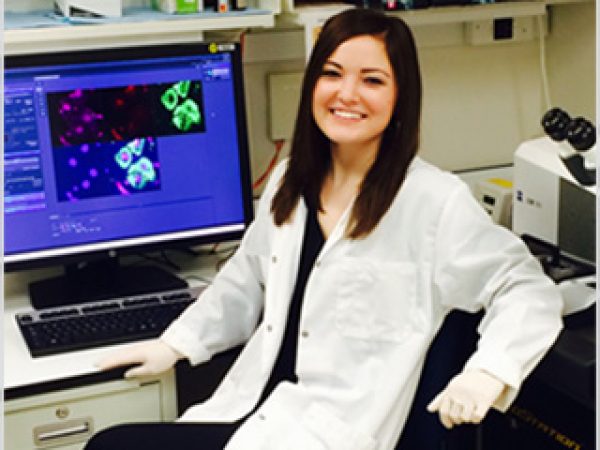