Home > Patients, Caregivers, and Advocates > Survivors > Running to Beat Leukemia (and All Cancers)

Loriana Hernandez-Aldama: Running to Beat Leukemia (and All Cancers)

Health and fitness reporter sees the benefits of healthy living when she faces a diagnosis of acute myeloid leukemia.

Loriana Hernandez-Aldama simply wanted to have another child and was frustrated that her physician insisted she be tested for cancer before moving forward. As it turns out, the doctor’s gut instinct was correct.

It started in 2013, when Loriana – a TV news anchor and health reporter in Austin, Texas – decided she and her husband were ready to have a second child. Their son had been conceived through in vitro fertilization, so they went back to their fertility doctor with the plan to use embryos frozen during their first IVF treatment.

The doctor noticed an elevated white-blood cell count from a routine blood test and sent Loriana to an oncologist for a follow-up out of an abundance of caution.

The oncologist said, “you’re the clean eating, green drinking, yoga enthusiast. There’s nothing wrong with you,” Loriana recalls. The doctor attributed her tiredness to having a young child and the rigors of being a morning news anchor.

But when Loriana’s fertility doctor refused to do the implant without a test, Loriana had a bone marrow biopsy.

To her shock – and the oncologist’s – Loriana had cancer, acute myeloid leukemia (AML). She quickly sent a message on social media and was soon connected to an oncologist specializing in AML at Johns Hopkins who looked at her blood work results and told her, “Get on a plane to Baltimore and say goodbye to your son. You don’t have time to lose.”

“That was the hardest day of my life,” said Loriana, choking up at the memory of saying goodbye to her little boy. “I didn’t know if I was ever going to see him again.”

She arrived in Baltimore ready to get on with her treatment with one goal: to go home to her son. But she quickly learned that her treatment for her leukemia would likely last many months. She also found that her years as the “clean eating, green drinking, yoga enthusiast,” who was in good shape from running fitness challenges for her viewers, benefited her as a cancer patient.

Because she was in good shape, she could tolerate higher doses of chemotherapy. She noticed that her chemo bag – the amount of the medication in her IV – was bigger than other patients on the leukemia ward. While being in good shape hadn’t prevented the cancer, it did mean she had an advantage in the fight against her disease.

In August 2014, after four rounds of chemotherapy, Loriana was able to go home. The next month, as part of a clinical trial she had joined, a bone marrow biopsy revealed abnormal stem cells that signaled the imminent return of her cancer. She returned to Baltimore for a bone marrow transplant in October. She was fortunate; her sister was a match. Most bone marrow donors are white, so if she had needed to seek a match from the general pool of donors, she may not have been as lucky.

In hindsight, Loriana recognizes that her commitment to fitness improved her ability to tolerate chemotherapy. To spread that awareness, Loriana created a nonprofit organization that encourages fitness, healthy eating, and work-life balance, with an eye toward preparing others for potential health challenges.

And as an AACR Foundation Ambassador, Loriana is committed to participating in the AACR Rock ‘n’ Roll Philadelphia races on Sept. 16 and 17, 2017. As a member of the AACR Runners for Research team, Loriana will help raise money in support of cancer research.

“Researchers have made some great strides, but we have so much further to go. A lot of people put on that tunnel vision and think, ‘well breast cancer may run in my family why would I help blood cancers?’ or ‘blood cancers run in my family why should I help breast cancers?’ but really we’re all in this fight together and research for one cancer tends to help the other cancer,” she said. “We need more research dollars for everyone.”

Learn more about Loriana’s cancer journey and the ArmorUp For Life nonprofit she created in this article in Cancer Today magazine. 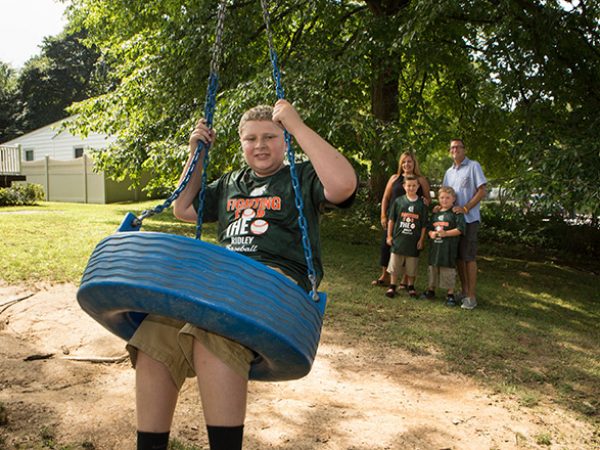