As we learned recently, Senator John McCain was diagnosed with glioblastoma multiforme, an aggressive form of central nervous system tumor that starts in the brain or spinal cord. It accounts for about 45 percent of all primary brain tumors, with about 11,000 diagnoses in men, women, and children each year. The prognosis for patients with glioblastoma is generally poor, with a five-year survival rate of less than 5 percent. Life expectancy, however, depends on several factors, including the extent to which the tumor is removed during surgery and response to treatments, according to the Genetics and Rare Disease Information Center of the National Institutes of Health (NIH).

Because glioblastoma tumors are located in the brain, surgery is difficult, and because of the cancer’s heterogeneity, meaning the tumor contains many different types of cells, treating glioblastoma is particularly challenging. Current standard treatment approaches include surgery, chemotherapy, and radiotherapy. Recently, the U.S. Food and Drug Administration approved an imaging agent, 5-aminolevulinic acid hydrochloride, which can make brain tumor tissue fluorescent and help surgeons distinguish between tumor and normal brain tissue in real time during surgery.

The clinical trials database of the NIH currently lists 274 studies testing new treatment options for this disease, including immunotherapies such as therapeutic vaccines, immune checkpoint inhibitors, and chimeric antigen receptor (CAR) T-cell therapies. In a large, international collaborative effort and a statistically driven clinical trial, called GBM AGILE, experts from around the world are hoping to test several single agents and combinations of drugs and biologics in ethnically diverse patients with glioblastoma, in order to find better treatment options for this devastating disease.

The American Association for Cancer Research (AACR) is committed to preventing and curing all cancers, including glioblastoma. We will continue to learn more about Sen. McCain’s diagnosis and treatment. Herein is a description of some recent advances in treating glioblastoma that have been presented at the AACR’s conferences, published in the AACR’s scientific journals, and supported by the AACR’s research grants and collaborations:

Tumor-treating fields as a therapeutic option for patients with glioblastoma

At the AACR Annual Meeting 2017, held in Washington, D.C., April 1-5, Roger Stupp, MD, professor of neurological surgery at Northwestern University, and colleagues presented data from a randomized phase III clinical trial, in which they tested whether a wearable medical device could improve survival for patients with glioblastoma.

The investigators found that glioblastoma patients who wore the medical device in addition to being treated with the chemotherapeutic temozolomide, had significantly improved median overall survival compared with those treated with temozolomide only. The wearable device delivers tumor-treating fields (TTFields), which are low-intensity electric fields alternating at an intermediate frequency (200kHz) that can block cell division.

In a study published in April 2017, in the AACR’s journal Clinical Cancer Research, a team of researchers from the Department of Neurosurgery at Duke University showed that a vaccine targeting cytomegalovirus (CMV) antigen pp65, combined with high-dose chemotherapy (temozolomide), improved both progression-free survival and overall survival for a small group of glioblastoma patients.

Though the survival outcomes far outpaced historical controls, the authors cautioned that this was a single-arm study without a control group. “We want to understand why some patients do better than others,” said the study’s lead author, Kristen Batich, MD, PhD.

Angiogenesis, a process of blood vessel development that can promote tumor growth and malignant transformation, is a pathological hallmark of glioblastoma, which is targeted for treatment using antiangiogenic therapies. In a study published in Clinical Cancer Research in October 2016, Philipp Kickingereder, MD, a radiology resident in the Department of Neuroradiology at the University of Heidelberg Medical Center in Germany, and his colleagues demonstrated that radiomics, a noninvasive approach that combines imaging and computation, can stratify patients with recurrent glioblastoma into those who are likely to benefit from the antiangiogenic drug bevacizumab (Avastin) and those who do not.

The team is conducting further studies with the inclusion of a control arm to clarify the value of the radiomic signature as a truly predictive imaging biomarker.

A Stand Up To Cancer (SU2C) Dream Team focusing on glioblastoma

In addition, Marcela Maus, MD, PhD, director of cellular immunotherapy at the Massachusetts General Hospital Cancer Center, who received an Innovative Research Grant  from SU2C, is working to develop a second generation of CAR-T cells that target cancer cells with a combination of specific gene mutations found in many glioblastomas, and modulate the tumor microenvironment to make it less immunosuppressive so as to give the T cells a better chance to work.

Researchers around the world are working tirelessly to harness new technologies to understand brain cancers better, and applying next-generation therapeutic approaches to make breakthroughs in diagnosis and treatment, with the goal of improving survival for patients with this deadly disease. 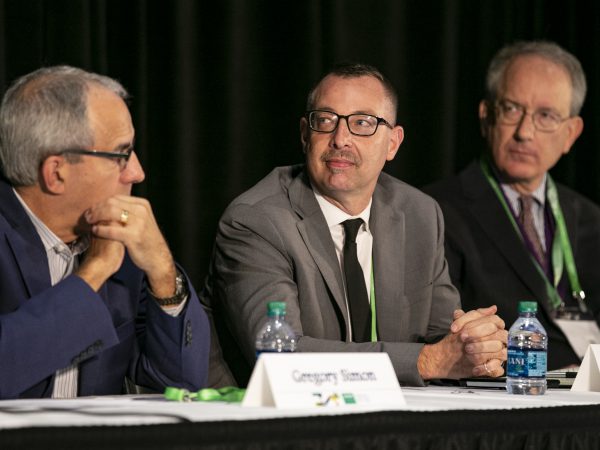