During the early part of November, we saw the U.S. Food and Drug Administration (FDA) approve a new molecularly targeted therapeutic, lorlatinib (Lorbrena), and expand the use of the immunotherapeutic pembrolizumab (Keytruda). These new approvals, which are for the treatment of certain patients with lung cancer and liver cancer, respectively, highlight that progress in the fields of precision medicine and immunotherapy is continuing unabated. NSCLC will account for up to 85 percent of the 234,030 new cases of lung cancers expected to be diagnosed in the United States in 2018. Advances in cancer genetics research have shown that mutations in the ALK gene promote the development and growth of 3 to 7 percent of NSCLCs, making ALK a good therapeutic target for this subset of NSCLCs.

Crizotinib was the first ALK-targeted therapeutic to be approved by the FDA, in August 2011. It was followed by ceritinib, which was approved in April 2014; alectinib, which was approved in December 2015; and brigatinib (Alunbrig), which was approved in April 2017. Until May 2017, crizotinib was the standard first treatment for patients with ALK-positive metastatic NSCLC. The other ALK-targeted therapeutics were approved only for use after a patient’s cancer had either progressed despite treatment with crizotinib or had failed to respond to crizotinib in the first place. Since then, ceritinib and alectinib have been approved as initial treatments for patients with ALK-positive metastatic NSCLC.

The approval of lorlatinib was based on results from a phase II clinical trial, some of which were published recently in Lancet Oncology. The results showed that 48 percent of 215 patients with ALK-positive metastatic NSCLC who had previously been treated with one or more ALK kinase inhibitors responded to treatment with lorlatinib. Overall, 4 percent of the patients had a complete response and 41 percent had a partial response. The researchers estimated that the median response duration was 12.5 months.

As highlighted in the Cancer Discovery paper, one area of intensive research investigation is determining the order to use the five FDA-approved ALK-targeted therapeutics to provide the maximum benefit for patients.

Pembrolizumab: Use expanded to liver cancer

Pembrolizumab was approved for treating patients with hepatocellular carcinoma—the most common form of primary liver cancer diagnosed in U.S. adults—that has progressed despite treatment with sorafenib (Nexavar) on Nov. 9, 2018. Liver cancer incidence and death rates have been increasing in the United States for the past four decades. In fact, liver cancer incidence rates more than tripled from 1975 to 2015, rising from 2.6 to 9.1 new cases per 100,000 U.S. adults. During the same period, liver cancer death rates more than doubled, increasing from 2.8 to 6.6 deaths per 100,000 U.S. adults. These grim statistics highlight the need for new approaches to preventing, detecting, diagnosing, and treating the disease.

The molecularly targeted therapeutic sorafenib has been the standard first treatment for patients diagnosed with advanced hepatocellular carcinoma since it was first approved by the FDA in 2007. As discussed in a previous post on this blog, the related molecularly targeted therapeutic lenvatinib (Lenvima) was recently approved by the FDA for use in this clinical context.

The approval of pembrolizumab for treating patients with hepatocellular carcinoma who have already been treated with sorafenib was based on results from the phase II KEYNOTE-224 clinical trial, which were published recently in Lancet Oncology. Among 104 patients whose advanced hepatocellular carcinoma had progressed despite treatment with sorafenib, pembrolizumab led to partial or complete tumor shrinkage in 18, which is 17 percent. The responses lasted six months or longer for 89 percent of these 18 patients and 12 months or longer for 56 percent.

Pembrolizumab is the second immunotherapeutic to be approved for treating patients with hepatocellular carcinoma that has progressed despite treatment with sorafenib. The first was nivolumab (Opdivo), which was approved for this use in September 2017.

Both pembrolizumab and nivolumab work by releasing a brake called PD-1 on cancer-fighting immune cells called T cells. Given that they target the immune system and not molecules specific to a particular cancer, these immunotherapeutics have been found to have relatively broad utility in the treatment of cancer.

As discussed in earlier posts on this blog, prior to this approval for liver cancer, pembrolizumab had already been approved for treating certain patients with NSCLC and seven other types of cancer: bladder cancer, cervical cancer, head and neck cancer, Hodgkin lymphoma, non-Hodgkin lymphoma, stomach cancer, and melanoma. In addition, it is also approved for treating patients with any type of solid tumor that is characterized by the presence of specific biomarkers known as microsatellite instability–high or mismatch repair–deficient.

Pembrolizumab is being tested in clinical trials for several other cancer types. Although many of these trials have not yet reported data, Merck, the company that develops and manufactures pembrolizumab, announced on Nov. 14, 2018, that the immunotherapeutic significantly improved overall survival compared with chemotherapy among patients with advanced esophageal or esophagogastric junction carcinoma who have tumors with high levels of PD-L1. They also stated that they would be submitting these data to regulatory authorities, increasing the likelihood that we will see further expansion of the use of pembrolizumab in the near future. 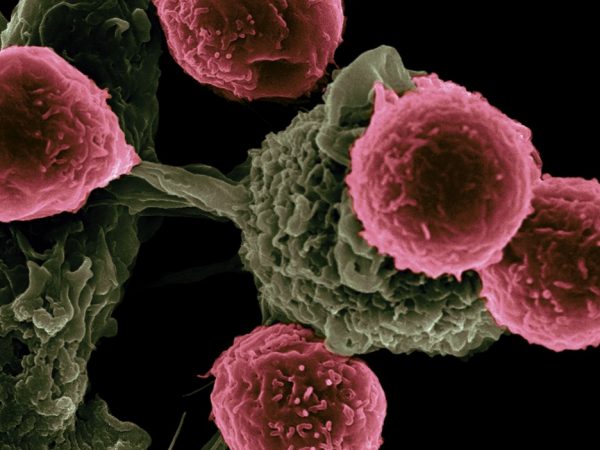