One of the world’s largest cancer research conferences, the AACR Annual Meeting 2019, came to an end with a plenary session titled “AACR Annual Meeting 2019 Highlights: Vision for the Future.” Leaders of the AACR provided an overview of the stellar presentations from the meeting on the topics of prevention, early detection, interception, and the latest breakthroughs in cutting-edge basic, translational, and clinical research.

“I hope you all feel the way I do – it’s been a tremendous meeting,” said outgoing AACR President Elizabeth M. Jaffee, MD, FAACR, who opened the session. “I can’t wait to get back to work and start thinking about everything I learned in this meeting.”

Cruz-Correa drew the audience’s attention to the special session on Li-Fraumeni Syndrome and p53, held to celebrate the “Gold and Ruby Anniversaries of Paradigm Models of Cancer Predisposition and Tumor Suppression.” These early discoveries have helped us understand the value of studies on cancer predisposition that allow us to perform intervention, she noted.

Cruz-Correa then highlighted some studies presented at the meeting in the area of cancer prevention. Recent data from the Cancer Prevention Study (CPS)-II Nutrition Cohort, in which more than 120,000 cancer-free men and post-menopausal women were studied to determine the effect of physical activity on risk of cancers associated with excess body fat (EBF) showed that an active lifestyle benefited even those with high BMI by lowering their risk for EBF-associated cancers. In a large case-control study of nearly 7,000 participants, compared with those who consumed the least amount of red and processed meat, those who consumed the most had up to 2.4-fold increased risk for developing sessile serrated colorectal polyps, a precursor for colorectal cancer. Data from a nutrition intervention clinical trial showed that replacing dietary animal protein with plant-based protein decreased the levels of intestinal N-nitroso compounds, which play an important role in the development of colon cancer.

In the area of chemoprevention and interception, Cruz-Correa discussed a study in which ARN-509, also known as apalutamide (Erleada), an androgen-receptor antagonist, provided protection against the induction of prostate cancer in a rat model. This therapeutic was approved by the U.S. Food and Drug Administration in 2018 for treating men with nonmetastatic prostate cancer that has stopped responding to standard antihormone treatments. These new data suggest that this therapeutic may have chemopreventive potential.

Cruz-Correa also talked about two studies that featured the utility of immunoprevention: Data from one study showed that a vaccine developed using four tumor antigens generated antigen-specific immune responses, reduced intestinal tumors, and improved survival in a mouse model of Lynch syndrome. The second study is a randomized double-blind, placebo-controlled clinical trial testing a MUC1 vaccine for its ability to elicit immune memory and prevent recurrence in patients with newly diagnosed advanced adenomas.

Cruz-Correa discussed advances in latest technologies such as liquid biopsies to perform blood-based screening, early detection, and surveillance. She highlighted two studies, one in which circulating tumor cells could aid in the detection of lung cancers in high-risk subjects undergoing low-dose CT screening, and another in which serum biomarkers were used to detect early-stage ovarian cancer. Hopefully these approaches “will allow us to have less invasive, more effective tests for early detection of cancer,” noted Cruz-Correa.

“However, I always say, is there a magic pill?” Cruz-Correa asked. “Maybe a magic pill [for cancer] will not be a pill [but] will be a vaccine,” she concluded.

The next speaker was the Chair of the AACR Annual Meeting 2019 Program Committee, John D. Carpten, PhD, professor and chair of Translational Genomics, and director of the Institute of Translational Genomics at the Keck School of Medicine of USC in Los Angeles. Carpten spoke about advances in basic cancer science and translational research presented at the meeting. He highlighted the stellar presentations made in the opening plenary session titled, “Achieving Equitable Patient Care through Precision and Convergent Cancer Science.” He also pointed to the “really incredible plenary session on Monday morning” that put a spotlight on the burden of cancer in different populations around the world, titled “Clinical and Translational Research in Diverse Populations.”

Carpten noted that the latest research presented at the meeting on single-cell technologies, which are capable of profiling thousands of individual cells simultaneously, is propelling our understanding of tumor evolution and heterogeneity. However, single-cell technologies “lose their spatial context” and structure within the tissue, he said, adding that this challenge could be overcome by pairing these technologies with the latest advances in imaging strategies. He also brought attention to the need for more publicly available databases, and the importance of overcoming bottlenecks in the areas of data interpretation and drug access, and more research in understanding disease resistance and relapse.

Immuno-oncology was a major theme at the meeting, he noted, and immune exhaustion in cancer therapy and epigenetic modifications that occur during T-cell exhaustion were major areas of discussion as it is believed that they might play a significant role in resistance to treatment, he said. “Changes in chromatic dynamic states that define tumor-specific T-cell dysfunction, therapeutic reprogrammability, and opposing functions of interferon signaling that regulate adaptive versus innate immunity in cancer – this is a very important field that I’m looking to progress in this area going forward,” Carpten said.

“I think this year’s meeting was a hit in terms of what we’re learning about basic and translational science in cancer research, and I think we’ll continue to move that way through integrative science, global impact, toward individualized patient care,” Carpten concluded.

The third presenter in the session was Annual Meeting Program Committee Vice-Chair Patricia LoRusso, DO, who is professor of Medicine and associate director of Experimental Therapeutics at Yale Cancer Center. LoRusso provided an overview of the clinical research and clinical trials and therapeutics presented at the meeting.

“What we saw this year at [the meeting] was both forward translation as well as reverse translation,” began LoRusso, referring to studies that translated benchside research into early- and late-phase clinical trials, as well as the development of interdisciplinary teams that took bedside data back to the bench, in order to develop novel predictive biomarkers and tailor therapeutic interventions for patients.

LoRusso noted that several presentations at the meeting had novel trial designs that focused on three key aspects: bringing novel agents into earlier treatment lines, preselection of patient populations, and integration of biomarkers.

She talked about the data from the I-SPY2 trial that investigated the role of immune-cell infiltrates as biomarkers of response to neoadjuvant treatment of HER2-negative breast cancer with an anti-PD-1 immunotherapeutic, the phase 1b trial of CD40-agonistic monoclonal antibody APX005M plus gemcitabine and nab-paclitaxel with or without nivolumab (Opdivo) for patients with untreated metastatic pancreatic ductal adenocarcinoma, and an interim analysis of a phase II clinical trial in which rucaparib was tested as maintenance therapy for advanced, platinum-sensitive BRCA- or PALB2-related pancreatic cancer.

Talking about the trials that preselected patient populations, LoRusso pointed to data from the neuroendocrine cohort of the phase II Basket Trial of Dual Anti-CTLA-4 and Anti-PD-1 Blockade in Rare Tumors (DART) discussed in this blog post, and data from the TATTON trial that tested MEK and MET-targeted therapies in patients with non-small cell lung cancer who had received prior first-, second-, or third-generation EGFR inhibitors. Data from this trial are discussed in this blog post.

LoRusso also touched upon an important question in the field: “Are we beginning to tackle resistance mechanisms to immune checkpoint inhibitors?” She drew attention to a phase II trial of the epigenetic drug entinostat (ENT) added to pembrolizumab (Keytruda) in patients with non-small cell lung cancer whose disease had progressed on or after anti-PD-1 therapy. She also talked about the utility of tumor mutational burden as a biomarker for treatment with immune checkpoint inhibitors, as shown in the data from the phase III MYSTIC trial. Data from these trials are discussed in this blog post.

LoRusso remarked that the promising data from the phase III ADMIRAL study, in which the newly approved molecularly targeted therapeutic gilteritinib was tested in patients with relapsed/refractory AML that tests positive for a mutation in the FLT3 gene, were a “home run.”

“What do we want to see as clinical researchers and interdisciplinary teams at the AACR [Annual Meeting] 2020?” asked LoRusso, who suggested the following: continued “bench to bedside to bench” research using prospective biomarkers; advancing many early-stage trials presented at the meeting to larger, randomized trials; utilizing novel therapies as earlier lines of treatment; further use of innovative delivery systems of chemo-immunotherapy, such as fecal microbiota transplants and systemic vaccines; continued development of novel trial designs to maximize patient outcome with minimal resources; and overcoming financial and social barriers to make progress for underrepresented populations.

LoRusso concluded that she hopes to see a “continued focus of AACR as an organization, and also each of their members, in their mission to put patients first and foremost in this battle.”

Remarks from the new President

The last speaker of the session was the new AACR President, Elaine R. Mardis, PhD, Nationwide Foundation Endowed Chair in Genomic Medicine, co-executive director of the Institute for Genomic Medicine at Nationwide Children’s Hospital, and professor of pediatrics at The Ohio State University College of Medicine.

“I’m so excited to be here and be your president for the upcoming year,” began Mardis, who added, “I’m looking forward to all the roles that I will play in support of this wonderful organization.”

Mardis said she is enthusiastic about organizing the AACR Annual Meeting 2020 with the program committee chair Antoni Ribas, MD, PhD, professor of medicine at the David Geffen School of Medicine at the University of California Los Angeles (UCLA); director of the UCLA Jonsson Comprehensive Cancer Center Tumor Immunology Program; and director of the Parker Institute for Cancer Immunotherapy Center at UCLA. Ribas was recently elected AACR President-Elect 2019-2020.

“The other thing I’m really looking forward to is working closely with our CEO Dr. Margaret Foti and the amazing staff at the AACR,” Mardis said. “It’s truly a privilege to be able to interact with them and to drive the mission of this important cancer research organization forward.”

Mardis concluded, “Finally, I’m looking forward to seeing all of you in San Diego in 2020, a really nice location, starting April 24 through 29.” 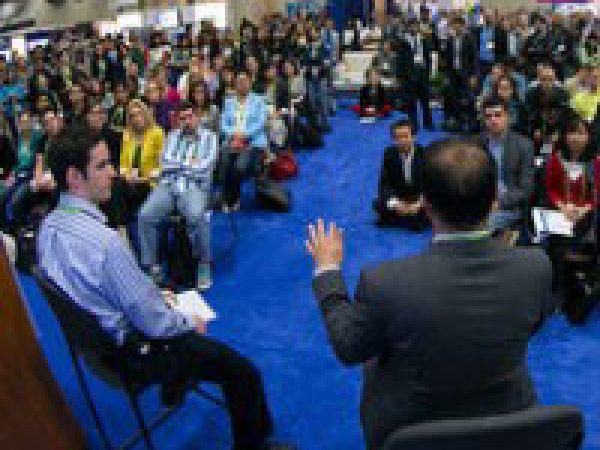