As April comes to a close, it’s time to look back at some of the exciting research published in the AACR journals this month. The editors of the AACR’s scientific journals have identified 10 “must read” articles from this month’s issues, including two phase I clinical trials, an analysis of genetic determinants of cancer risk, and a study on the gut microbiome’s impact on treatment response, among others.

In addition, the editors of Cancer Discovery have chosen to highlight the special 10th anniversary April issue in its entirety, which features a look back at the first decade of Cancer Discovery and includes new review articles, perspectives, and commentary on the latest directions in cancer research.

As always, the highlighted articles are freely available for a limited time.

Myeloid cancers frequently harbor mutations in TET2, a TET dioxygenase that contributes to DNA demethylation. In TET2-deficient cells or mouse models, the related TET dioxygenases, TET1 and TET3, compensate for the loss of TET2 activity. Prior research found that deletion of all three TET proteins is embryonically lethal in mice. Based on these findings, the authors of this study hypothesized that inhibiting residual TET activity in TET2-mutated myeloid cancers could be an effective therapeutic strategy. Supporting their hypothesis, they found that a small molecular inhibitor of TET reduced the proliferation of TET2-mutated cells, but not cells with wild-type TET2, in vitro and in vivo. Treatment with the TET inhibitor also suppressed clonal evolution of TET2-mutated patient-derived leukemia xenografts. Together, the results indicate that TET inhibition is synthetically lethal in myeloid cancers with TET2 mutations. The authors propose TET inhibition as a potential new class of targeted therapy for TET2-mutated myeloid cancers. This article was featured on the cover of the April issue.

Blocking TIM-3 in Treatment-refractory Advanced Solid Tumors: A Phase Ia/b Study of LY3321367 with or without an Anti-PD-L1 Antibody

Inhibition of the immune checkpoint protein, T-cell immunoglobulin and mucin-domain–containing molecule-3 (TIM-3), has shown promise for cancer therapy in preclinical studies. In this phase I clinical trial, researchers evaluated the safety and efficacy of the investigational TIM-3 inhibitor LY3321367 alone and in combination with the investigational PD-1 inhibitor LY300054 in patients with advanced solid tumors. The recommended phase II dose for LY3321367 was determined to be 1,200 mg biweekly for four doses followed by 600 mg every two weeks. In an expansion cohort of patients with non-small cell lung cancer (NSCLC), the 23 patients who received LY3321367 monotherapy and whose tumors were refractory to prior anti-PD-1/L1 therapy had a progression-free survival (PFS) of 1.9 months, a 35 percent disease control rate (DCR), and a 0 percent objective response rate (ORR). In contrast, 14 patients with NSCLC who had responded to prior anti-PD-1/L1 therapy had a PFS of 7.3 months, 50 percent DCR, and 7 percent ORR after LY3321367 monotherapy. Among the 91 patients who received the combination therapy, DCR was 42 percent, and ORR was 4 percent. No dose-limiting toxicities were observed. Treatment-related adverse events included pruritis, rash, fatigue, anorexia, and infusion-related reactions. The authors conclude that LY3321367 has an acceptable safety profile but limited efficacy. This article was highlighted in the April issue.

Cytidine analogs have been shown to slow tumor growth through various mechanisms, including through depletion of DNA methyltransferase I; depletion of this enzyme prevents it from inhibiting the expression of tumor suppressor genes through DNA methylation. Incorporating fluorine into cytidine analogs could improve their efficacy by repressing cellular metabolism and altering the potency, selectivity, and toxicity of the analogs. Here, the authors developed a novel fluorine-containing cytidine analog called 5-aza-4′-thio-2′-β-fluoro-2′-deoxycytidine (F-aza-T-dCyd) and compared its efficacy to other cytidine analogs. They found that F-aza-T-dCyd induced cytotoxicity and performed as well or better than some existing analogs against various cancer types. For example, F-aza-T-dCyd was more effective than aza-T-dCyd in slowing growth of colorectal, leukemia, and bladder cancer xenografts, and was equally effective as aza-T-dCyd against non-small cell lung cancer and ovarian cancer xenografts. The authors propose that further investigation of F-aza-T-dCyd is warranted. This study was highlighted and featured on the cover of the April issue.

Ductal carcinoma in situ (DCIS) of the breast is a noninvasive disease that can progress to invasive ductal carcinoma (IDC) in some patients. The authors of this study examined the relationship between DCIS and IDC using matched samples from patients whose disease had progressed from DCIS to IDC. They found that IDC tumors were genetically similar to DCIS precursors despite long latency periods and treatments that occurred between DCIS and IDC development. Furthermore, the immune microenvironment of IDC, including its status as an immunogenically “cold” or “hot” tumor, was established as early as DCIS in some cases. However, the presence of various infiltrating immune cell populations differed between DCIS and IDC, and copy-number alterations of MHC-I presentation machinery were associated with IDC. Genetic similarities included common hotspot mutations, such as those in the TP53 and PIK3CA genes, which were associated with several immune signatures. The authors propose that these mutations in DCIS may modulate the immune microenvironment to select for genetic alterations and drive transition to IDC. This study was highlighted and featured on the cover of the April issue.

Long-lasting cognitive deficits frequently occur in patients with glioma who are treated with radiation; however, the mechanisms underlying radiation-induced cognitive deficits (RICD) are not clear. Since the complement system detects changes to the inflammatory environment and mediates gliosis in response to tissue damage, the authors of this study hypothesized that changes in glial cell function mediated by complement may contribute to RICD. The authors observed that mice treated with radiation had elevated signatures of gliosis, including increased expression of toll-like receptor 4 and the complement proteins C1q and C3. C1q-depleted mice showed no cognitive deficits after radiation therapy, suggesting a role for this upstream complement protein in RCID. Depletion of C1q also reduced radiation-induced microglial activation and synaptic loss, and lowered expression of the C5a receptor, astrocytic-C3, and microglial TLR4. Together, the results indicate that the upstream complement cascade component C1q is involved in RICD. A related commentary can be found here.

Preclinical studies have shown that the gut microbiota may influence the efficacy of immunotherapy. These findings have raised the possibility that modifying patient gut microbiota could improve clinical responses, a strategy that is being explored in clinical trials. However, the mechanisms by which the gut microbiota exerts its effect on the immune response are still under investigation. In this review, the authors summarize research findings that suggest that the gut microbiota may impact immune cells through three interconnected mechanisms: activation of pattern recognition receptors, molecular mimicry, and impact of metabolites. Furthermore, the authors discuss the therapeutic potential, clinical trials, and limitations of various microbiota modulation techniques, including fecal microbial transplantation, probiotics, gut microbial consortia, and diet and prebiotics.

Approximately half of patients with HER2-positive breast cancer do not respond to the HER2-targeted therapy trastuzumab (Herceptin). Emerging evidence has implicated the immune system in the antitumor activity of trastuzumab. In addition, studies have demonstrated that the gut microbiota may regulate the immune system and response to therapy. Here, researchers examined the impact of the gut microbiota on trastuzumab efficacy. Using mouse models of HER2-positive breast cancer, the researchers found that antibiotic treatment or fecal microbiota transplantation from antibiotic-treated mice reduced the efficacy of trastuzumab, impaired tumor recruitment of CD4+ T cells and granzyme B-positive cells, and led to reductions in dendritic cell activation and cytokine release. Furthermore, patients who did not respond to neoadjuvant trastuzumab were more likely to have lower α-diversity and lower abundance of Lachnospiraceae, Turicibacteraceae, Bifidobacteriaceae, and Prevotellaceae bacteria than patients who had a pathologic complete response. β-diversity was associated with enriched interferon and NO2-IL12 signaling, as well as activation of CD4+ T cells and dendritic cells, indicating stimulation of the immune response in the tumor microenvironment. The authors conclude that the gut microbiota influences trastuzumab efficacy. They propose that the gut microbiota may be used as a biomarker of treatment response or may be modulated to improve responses. A related commentary can be found here.

Prexasertib, an inhibitor of the CHK1 cell cycle protein, exhibited modest clinical efficacy in a prior clinical trial. In this study, the authors evaluated the safety and efficacy of prexasertib in combination with samotolisib, an inhibitor of the PI3K and mTOR signaling proteins. Preclinical experimentation showed that the combination inhibited the proliferation of cancer cells in primary tumors and cell lines and had synergistic or additive effects in xenograft mouse models. Based on these findings, a phase I clinical trial was initiated, which enrolled 53 pretreated patients with solid tumors who received the prexasertib and samotolisib combination therapy. Eight partial responses were observed, for an objective response rate of 15.1 percent. The ORR was 15.4 percent for the escalation cohort, 13.3 percent for the 15 patients with PIK3CA-mutated tumors, and 25 percent for the 16 patients with triple-negative breast cancer. Treatment-related leukopenia or neutropenia was observed in 94.3 percent of patients, thrombocytopenia in 62.3 percent, and nausea in 52.8 percent. The authors suggest that these findings may inform future trials with other CHK1 or PI3K inhibitors. This article was highlighted in the April issue. 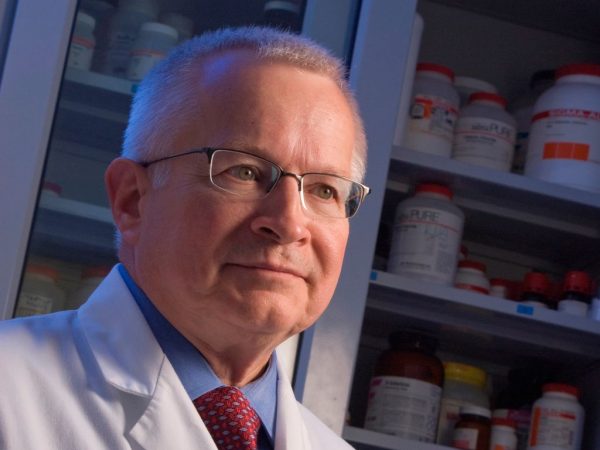