Progress against cancer has been fueled not by a single discipline or a sole blockbuster discovery, but by incremental advances across basic, translational, and clinical science, and across dozens of academic disciplines.

Reflecting this interplay between all aspects of cancer research, the AACR Annual Meeting 2022 featured the theme “Decoding Cancer Complexity, Integrating Science, Transforming Patient Outcomes.” Marcia R. Cruz-Correa, MD, PhD, who served as Program Chair for this year’s meeting, said the theme served as a common factor in the research showcased in the Opening Plenary session. “The Opening Plenary encapsulates the overall concept of the meeting by showcasing several examples of how researchers are decoding the complexities of cancer, from premalignancy all the way to the population level,” she said.

Secrets of the crypt

Stratton began by reminding the audience that while mutations are a common feature of cancer, the biological process of mutagenesis occurs constantly in healthy individuals as well as in those who develop cancer. Learning more about the process of mutation can help researchers better understand cancer development and could potentially allow for more cancers to be detected at earlier timepoints, he said.

Stratton discussed his lab’s research on the colon, which is made up of 15 million “crypts,” which house stem cells and which serve as a center of cell mutation and DNA repair. Stratton explained that normal cells in colorectal crypts accumulate about 50 somatic mutations during each year of life. Colorectal cancer cells carry a mutational burden about seven times higher—350 mutations per year.

People with the hereditary conditions that are linked to colorectal cancer, such as Lynch syndrome and familial adenomatous polyposis, generally have elevated mutational rates. Stratton said that in his research, the patients with these syndromes also had higher mutational rates in all other cell types, including musculoskeletal, blood, skin, and brain cells.

Altering the path of resistance

Patients with non-small cell lung cancer whose tumors have EGFR mutations have benefited from research that led to the development of therapeutics like tyrosine kinase inhibitors, said Franziska Michor, PhD, of Dana-Farber Cancer Institute and Harvard University. However, as in most cancer types, these patients often develop resistance to the drugs and their cancer ultimately progresses.

Michor and colleagues used a mathematical model to evaluate potential alterations to the dosages of two therapeutics currently used to treat patients with NSCLC—dacomitinib (Vizimpro), a pan-HER inhibitor, and osimertinib (Tagrisso), an EGFR inhibitor.

The team identified potential modifications to the dosages approved by the U.S. Food and Drug Administration. They have tested the alternate schedule in a small trial at Memorial Sloan Kettering Cancer Center and will continue to test dosages in larger studies. Ultimately, Michor said, “This modeling platform can be extended to identify personalized treatment strategies to slow evolution of treatment resistance.”

Clues from the microbiome

In recent years, the human microbiome has provided fertile ground for cancer research. About 20 percent of all cancers are associated with infection, said Jason M. Crawford, PhD, of Yale University, and the microbiome plays critical roles in these cancers, including in inflammation, DNA damage, and more.

“The microbiome is a new frontier in chemical ecology,” Crawford said. “The host-microbe interface is a complex interplay of molecules produced by the host and the microbiome, all of which can interact in this diverse ecosystem.”

E. coli is just one example of the myriad mysteries of the human microbiome. “The amount of genotoxic bacteria in our gut is much larger than we had previously appreciated,” Crawford concluded.

Marcia C. Haigis, PhD, of Harvard Medical School, built upon Crawford’s discussion of cancer and the microbiome. “Tumors do not exist in isolation; they exist in a microenvironment with multiple other factors and cells,” she said, adding that this microenvironment is perpetually affected by the metabolic process.

Previous research has established obesity as a factor in 13 types of cancer. With half the U.S. population expected to be clinically obese by 2030, Haigis said it is critically important to understand how obesity and its effects on metabolism leads to cancer development.

Haigis explained that whereas all cells use fuel, cancer cells are particularly voracious, as are T cells, the cytotoxic powerhouses of the immune system. In an experiment in her lab, researchers fed one group of mice a low-fat diet for 8 to 10 weeks, and fed another group of mice a high-fat diet.

The researchers were unsurprised to see that the high-fat diet contributed to tumor development in the mice. But they were surprised to discover that obesity reduced the proportion and the functionality of intratumoral CD8+ T cells. The research team has further evaluated this discovery with human data from The Cancer Genome Atlas, and has found reduced function in the T cells of severely obese patients.

The promise of early detection

“We are here at the AACR Annual Meeting pursuing the goal of reducing deaths from cancer. The best way to do this is to prevent cancer in the first place,” said Nickolas Papadopoulos, PhD, of the Sidney Kimmel Comprehensive Cancer Center and Johns Hopkins School of Medicine. “Earlier detection can make a significant difference in patient outcomes.”

In his Plenary talk, Papadopoulos described the team’s efforts to combine ctDNA with protein biomarkers, hoping to increase the accuracy of the test. They conducted a prospective screening study, DETECT A, which enrolled 10,000 women without a cancer diagnosis. The CancerSEEK test doubled the number of cancers detected by standard-of-care screening alone, including several types that do not currently have a screen, such as lymphoma, and kidney, uterine, and ovarian cancer.

Papadopoulos said his team’s next step is to continue increasing the sensitivity of CancerSEEK by implementing new biomarkers.

Charles L. Sawyers, MD, FAACR, AACR Past President and a former chair of the steering committee of AACR Project GENIE, concluded the Opening Plenary with a discussion of the ever-evolving challenge of resistance to cancer treatments in his talk, “Future of cancer research in transforming patient outcomes.”

Through decades of advances in drug development and patient care, Sawyers said researchers have achieved some success in helping combat resistance to the “pillars” of cancer treatment—radiation, chemotherapy, targeted therapies, and immunotherapy. But cancer remains relentless, and an emerging frontier of research is “off-target escape,” said Sawyers, who is an internist and hematologic oncologist at the Memorial Sloan Kettering Cancer Center.

Sawyers said that while many of the drugs approved in recent years target very specific mutations, cancer finds ways to exploit the plasticity of the tumor microenvironment.

“As we go and put more and more pressure on the target, we start to see the transition to off-target resistance,” he said. Evoking the remarks of the previous speakers, Sawyers concluded by stating that disabling these resistance mechanisms will require researchers to understand the molecular underpinnings of cancer, and to detect and treat it at the precancerous stage when possible.

“The ultimate intervene-early strategy is to detect and treat at the precancer stage, but we need a commercial model that creates the necessary incentives,” Sawyers said. 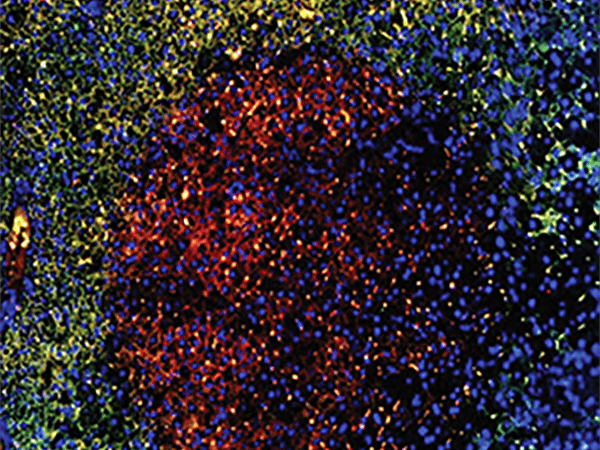